Effects of real-time biofeedback regarding peak load on lower extremities in healthy individuals: a pilot study

The aim of this study was to investigate, whether visual digital biofeedback, while executing jumping exercises, influences peak load during landing and therefore decreases the risk of developing osteoarthritis (OA) in the long term.

OA is a degenerative disease, with a possibility to cause symptoms in form of pain and restriction of movement. Many studies suggest prevention as the primary treatment for OA [1]. Biofeedback is the technique of providing biological information to humans that otherwise would be unknown. As sensor-based technology improved massively in recent years, and production cost decreased, there are new possibilities in form of ambulant biofeedback devices to potentially impact prevention and rehabilitation of OA [2].

A randomized controlled pilot study was conducted. Ten probands were recruited and wore stAPPone-insoles while performing a standardized set of jumping exercises. The probands were divided into an intervention- (gained access to real-time-biofeedback) and a control group (no biofeedback). Besides generating biofeedback in form of real-time visualization of pressure (see Figure 1), the insoles also recorded relative pressure values of each user. The pressure values recorded during landing phases were statistically analysed and interpreted. 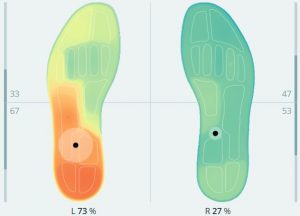 The results showed no statistically significant difference between intervention- and control group regarding maximum pressure and average peak pressure during each landing phase of each jump.

Although inference statistics show no significant difference between groups regarding pressure, descriptive analysis suggests that real-time biofeedback may have an influence on peak pressure (see Figure 2). Further research is needed to conclude accurate statements. Larger sample sizes and a test-retest scenario is recommended to make statistical evaluation more robust. 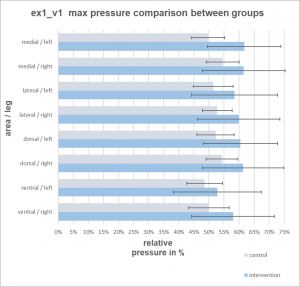