The aim of this study was to develop a prototype audio feedback device for exercises that require rotational stability of the pelvis. It was evaluated how the use of this device during Active Straight Leg Raise (ASLR) influences muscle thickness of Transversus Abdominis (TrA) and Internal Oblique (IO). Further, the newly built feedback device was compared to a feedback method with the subject's own fingers on the pelvis. 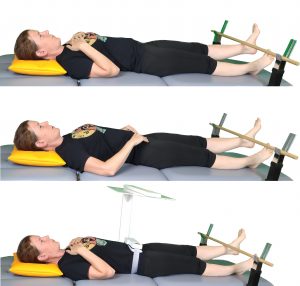 20 healthy subjects performed an ASLR without feedback of their pelvis position, an ASLR with their own fingers on the anterior-superior iliac spine as tactile feedback of their pelvis position and an ASLR with the newly built Belltie feedback device. During all exercises, the thickness of TrA and IO was measured by ultrasound imaging and the percent thickness change to the measurement at rest was calculated. The results were described with descriptive statistics.

Data show a tendency to increased thickness change of TrA and IO in ASLR with feedback as compared to ASLR without feedback. Comparing the two feedback methods, a tendency for slightly more muscle thickness increase was found during the ASLR with the finger feedback method as when using the Belltie feedback device. High standard deviations indicate large individual differences. As an additional finding, a trend toward better ability of rotational pelvis control in ASLR on the dominant leg side as compared to the non-dominant leg side was observed. 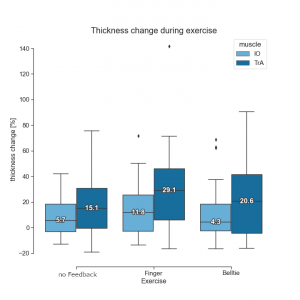 The newly built feedback device shows a tendency to recruitment of the abdominal muscles TrA and IO when used during the ASLR and could therefore be a helpful device in physiotherapy or specific training of TrA and IO.